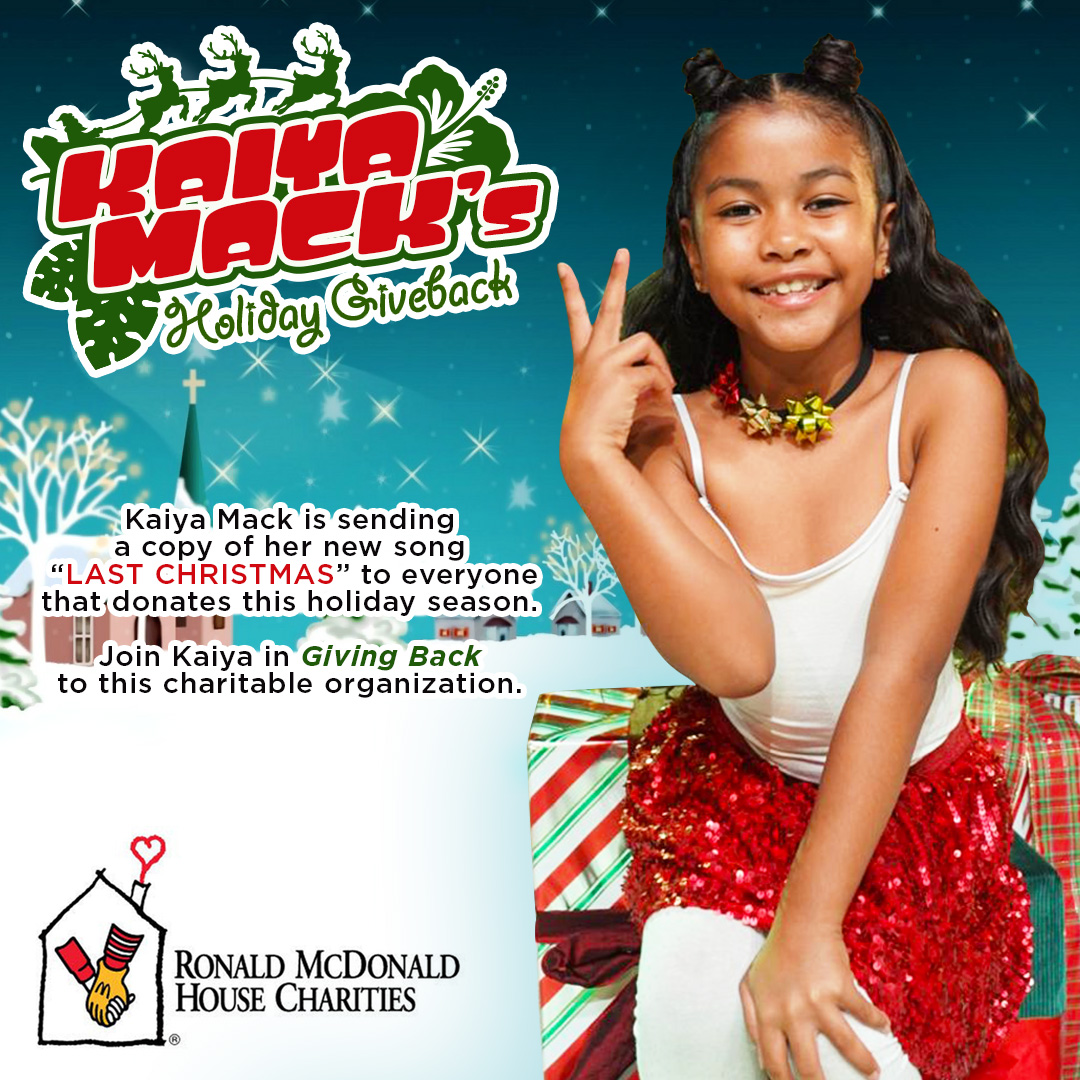 HONOLULU (December 14, 2020)— 7-year-old Kaiya Mack has her heart set on raising $10,000 to help children and families in need. Born with a rare birth defect of the abdominal wall called Gastroschisis, a condition that causes the intestines to be outside of the body, Kaiya has had more major operations than the sum of her current age. She has met all of her life-threatening challenges with grit and perseverance, as evidenced in her pursuits over the course of her young life. Kaiya Mack is a fun force to be reckoned with and has chosen to use her unique talents to raise awareness and funds for the Ronald McDonald House. During her first four months of life spent in the NICU, her parents were granted a four-month stay there. They would return again in 2019, when Kaiya had another operation. This is why Kaiya is determined to raise funds to give back to the Ronald McDonald House, as their generosity made a lasting, positive, impact on her and her family.

During this pandemic, with mandates to socially distance and shelter in place, Kaiya used this time to sing and record songs for fun. She recently took BTS’ smash hit, “Dynamite,” with Grammy nominated Reggae producer, JVibe, and remixed the beat. Next, she spent several days filming at some of Hawaii’s iconic spots, such as Duke’s Statue, The Wall in Waikiki, Waiola Shave Ice, Diamond Head and Leonard’s Bakery with her videographer/uncle, Valen Ahlo. She plans to use this music video to raise money for children and families in need of support over this holiday season. Donations are being accepted at http://support.rmhc.org/bayarea and will be shared by the Hawaii and Bay Area chapters of the Ronald McDonald House. Follow Kaiya on IG, TikTok, Youtube, Facebook @iamkaiyamack.

Kaiya Mack is charismatic, articulate, outgoing and talented. For someone born with a rare condition that required more major operations than the total number of years she has been alive, it is fascinating to witness the confidence, enthusiasm and boundless energy she radiates. Although Gastroschisis, a birth defect of the abdominal wall that causes the intestines to be outside of the body, provided years of challenges and setbacks, young Kaiya continued to persevere and thrive.

Likened to what is referred to as a ‘Callaloo’ in the Caribbean, she embodies diverse heritages and cultures from Trinidad, Africa, China, and of Jewish and Hungarian roots.  Raised in Hawaii, Kaiya loves Reggae-Dancehall, Soca, Afrobeat and KPOP Music. When she was a mere three years old, she watched the Reggae superstar, Tarrus Riley, perform at Damian Marley’s iconic Jamrock Reggae cruise. At the conclusion of the performance, she declared to her parents: “I want to make people happy, like Uncle Tarrus!” This was the start of Kaiya’s journey of pursuing her passion. The following year, as a four-year-old, she performed on stage at the Aloha Stadium, as part of the opening act for the Chainsmokers in front of 15,000 onlookers who cheered her on. Not fazed by large crowds, she would have more opportunities to shine onstage in San Francisco, chanting Buju Banton’s “Wanna Be Loved,” as part of the opening act for reggae icons Sizzla, Common Kings, J Boog and Afro B. Young Kaiya definitely walks her talk!

Ronald McDonald House Charities® of Hawaii, Inc. was created in 1997 to expand the positive impact of Hawaii’s Ronald McDonald House (RMH) on the communities served. The House, which opened in 1987, has been and will always be RMHC-HI’s cornerstone program. The mission of RMHC-HI is to “Provide a home-away-from-home for seriously ill children and their families and to develop programs and partnerships aimed at improving the lives of children in Hawaii and the Pacific.” In short, RMHC-HI keeps families together when they need each other most so that they can do the most to nurture each other. No other Hawaii organization is set up to do what RMHC-HI does. Much of its success can be credited to the community, not only for monetary contributions but also the thousands of hours of personal time given by hundreds of committed RMHC-HI volunteers.